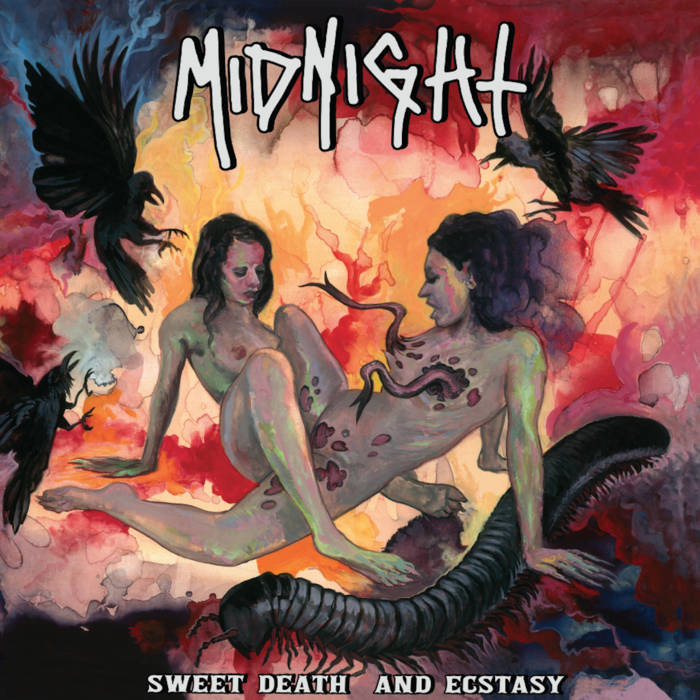 space.scoundrel Do you like no-frills music? What about music that actively reaches out and tears frills off other things? How about loud, evil riffs and supercharged rhythm? Midnight's got what you need. Meet 'em out back and bring an ice pack for your neck. Favorite track: Poison Trash.

By now, MIDNIGHT need no introduction. Guided by the twisted muse of mainman Athenar since 2003, this Cleveland cult have been slaying the metal/punk underground with their own, highly addictive brand of lust, filth, and sleaze, subsequently building up a sizable catalog and garnering a rabid fanbase. While there's certainly fanatics for the band's early EP work, it was MIDNIGHT's debut album, Satanic Royalty - released to international fanfare in 2011 by HELLS HEADBANGERS - that entered the band's name into the annals of "classic." Never one to rush things (nor drop an EP along the way), MIDNIGHT continued their underground dominance with No Mercy for Mayhem in 2014, further perfecting their signature sound. Now, with their massively anticipated third album, "Sweet Death and Ecstasy," Athenar and co. return with their darkest and most daring effort yet.

Granted, upon the first detonating chords of opener "Crushed by Demons," it would be fair to assume that "Sweet Death and Ecstasy" is simply classic MIDNIGHT...until the track time nearly doubles what a characteristic track of theirs would be. This is no mere bloat, though: bookended by two of the band's longest songs to date, "Sweet Death and Ecstasy" lays bare a more anguished 'n' aggravated MIDNIGHT, forever in thrall to the usual subjects (LUST, FILTH, SLEAZE) but speaking a slightly different, altogether-more-poisonous tongue. It both charges harder than ever - even harder than the band's early EP work, arguably - and also puts on the brakes to bang 'n' clang in a manner most foul. Indeed, MIDNIGHT truly deliver "Sweet Death and Ecstasy" in a swift 32 minutes, and it's absolutely addicting. What's more, the CD version will feature a bonus disc that's a 12-song live rehearsal recorded in 2015 by Commandor Vanik. There's no dawn for MIDNIGHT...ever!

Bandcamp Daily  your guide to the world of Bandcamp